Which Tires Wear Faster on AWD? 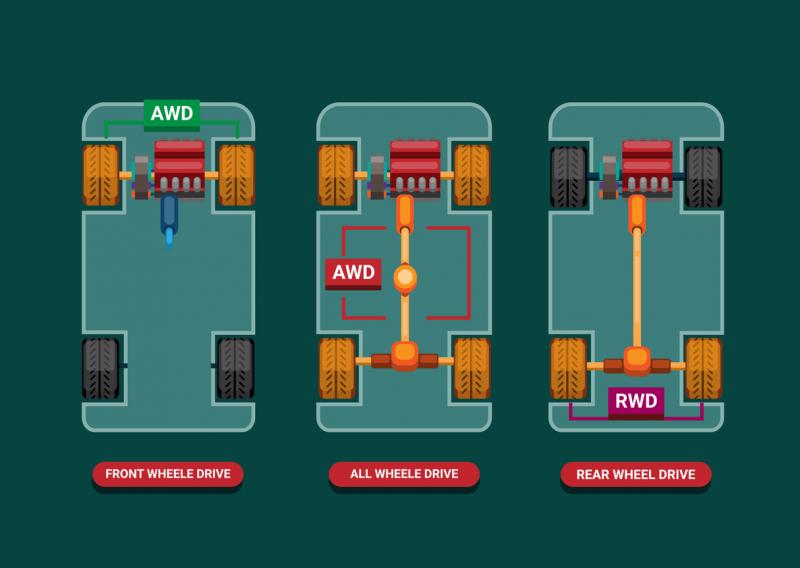 At some point in their life, most people who have driven a motor vehicle have had the frustrating experience of losing traction under a tire, resulting in a 20 minute battle with friction to get you back on your way. You may have even had to step out into a frigid winter night to help push a stranger's car out of a poorly shovelled driveway or needed to call a tow truck because your wheel got stuck in an extra muddy puddle on the dirt road while you were headed to the cottage for the long weekend.

In the past, if you wanted to drive a car that can handle the challenges of driving in tough weather conditions or an off-road adventure, you were limited to some trucks and SUVs that were equipped with all-wheel drive (AWD). But nowadays, vehicles ranging from large family SUVs and trucks to compact sedans can have an AWD feature. Now that more people among the general population can own a car with AWD, it's important to understand the effect AWD has on your car and its parts to ensure they are properly maintained, and no one's safety gets put at risk.

AWD is great for giving drivers additional traction when driving in slippery conditions, but it does come with a few drawbacks. Since car parts are so interconnected with each other, turning on AWD can cause some parts to wear down faster, like the tires. Below we break down how AWD affects the tires on your vehicle and what tire service you need to keep your car working safely.

Most vehicles you see driving around town are using what’s called two-wheel drive. Simply put, the car is only putting energy into two wheels at a time, either both front wheels or both back wheels. When you activate AWD, the car powers all four wheels at once. Having all four wheels powered at the same time gives the vehicle more balance, stability, traction and handling than it ever could with just two wheels.

Not every AWD system functions in the exact same way, but for the most part, they distribute power to the wheels in similar fashions. When AWD is on, the four wheels are mechanically connected to one another via these parts:

The interconnectivity of those parts and a central computer allow AWD systems to feel which tires have good traction and which ones are spinning out. That’s how AWD provides enhanced traction, it redirects power to the wheels that are most connected to the ground so there is no wasted energy on a tire with no friction to move you forward.

Which Tires Wear Down Faster?

It's a common misconception that since AWD controls each wheel on a car, your tires will wear out evenly. However, that is not the case. Because the front tires of a car are burdened with the responsibility of braking and steering, they will usually wear out first. On the other hand, when AWD is working at full capacity, it may put a much heavier workload on one specific tire, depending on the situation. That can cause that tire to wear out faster in that instance. Now imagine you’ve had to use AWD frequently on your drive to and from work during a particularly icy winter. Each of your four tires is likely to have worn down to varying degrees, resulting in a set of mismatched tires.

Every action has an equal and opposite reaction. Isaac Newton probably wasn’t thinking about tires and drivetrains when he came up with his third law of motion, but the concept is useful when we think about how AWD affects your car. AWD provides drivers with the benefits of enhanced traction and stability but can wear down your tires unequally, causing problems that are hidden to average drivers.

Mismatched tires can cause some serious damage to the parts of a vehicle that control the wheels. Even just one tire that has had its tread worn down more than the others, or is a smaller circumference, can cause the central computer that controls AWD to get incorrect readings. If the central computer is getting inaccurate information, there’s no way it can properly distribute power to the right places.

For example, suppose your vehicle has one tire that has been worn down more than the others, meaning it now has a slightly smaller circumference. In that case, your AWD system might get confused into thinking that that tire is spinning out (because smaller circumference means more revolutions). Naturally, when the computer detects a tire spinning out, it will reduce the power to that one wheel and increase power to the others, even though there is no real spin out in this scenario. When mismatched tires confuse AWD systems, four-wheel lock or traction control can get triggered when they aren't needed, resulting in undue stress on the whole system. If you aren't paying attention to this issue on your vehicle, it could cost you a significant chunk of change to replace those parts down the road.

To avoid confusing your AWD system and keep your car in tip-top shape, the best thing you can do is ensure you have four tires of equal size and tread. When you have one tire that needs to be replaced and three in relatively good condition, it is tempting to save some money up front by only replacing one tire. Unfortunately, when it comes to AWD, this still leaves you with a mismatched set of tires that poses the same risks to your vehicle that you had before getting the tire service.

You can avoid extremely expensive repairs in the future by spending more on a full set of matching tires when it’s time to replace any, even just one. That is not what people want to hear. Of course everyone would rather replace just one tire instead of four when only one is damaged or worn out. But the price is well worth it to avoid breaking something like the transmission because you didn’t spend the money to keep AWD working properly.